When working with usernames, passwords or api keys these need to be stored in a secure and manageble way. Usually I find that these are added to Application Settings and manually handled in several places, this is not a desirable way of working and may look something like this, secrets spread out in all areas with red circle: 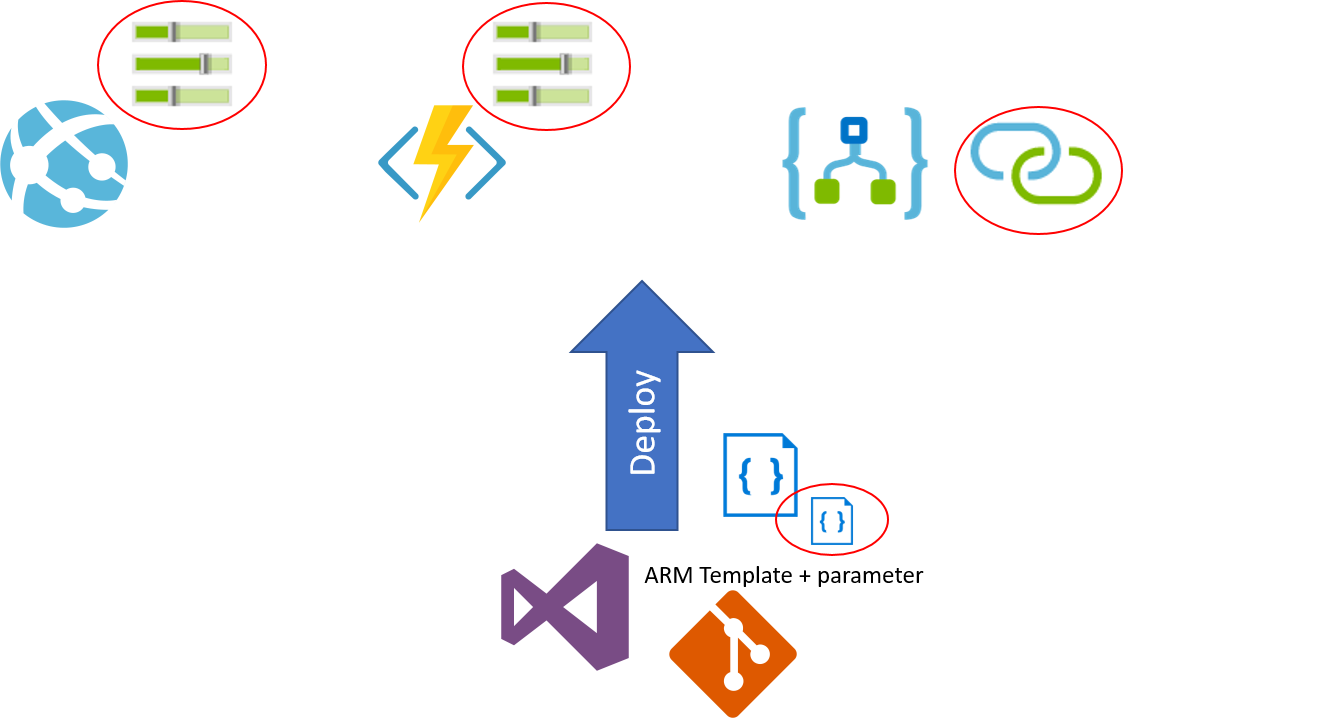 The first step is to centralize the Values and there I find that Azure Key Vault Vault is a superb place for storage, we got RBAC support for granular security, making it possible for a developer to access the values via code or when deploying via ARM template but not to see or edit the value. So with this we can make sure that passwords/usernames and other secrets are not spread via email’s, stored in dropbox or other “safe” places when distributed to the developers to add them to the App Settings or store them in parameter files for our ARM templates. It also adds reusability so if the value is needed in a Function and in a Logic App we can make sure it’s the same value that is used and we can manage it in one place.

So let’s have this sample in our KeyVault where sqluser and sqlpassword should be used in both a Function and when creating a Logic App Connector. 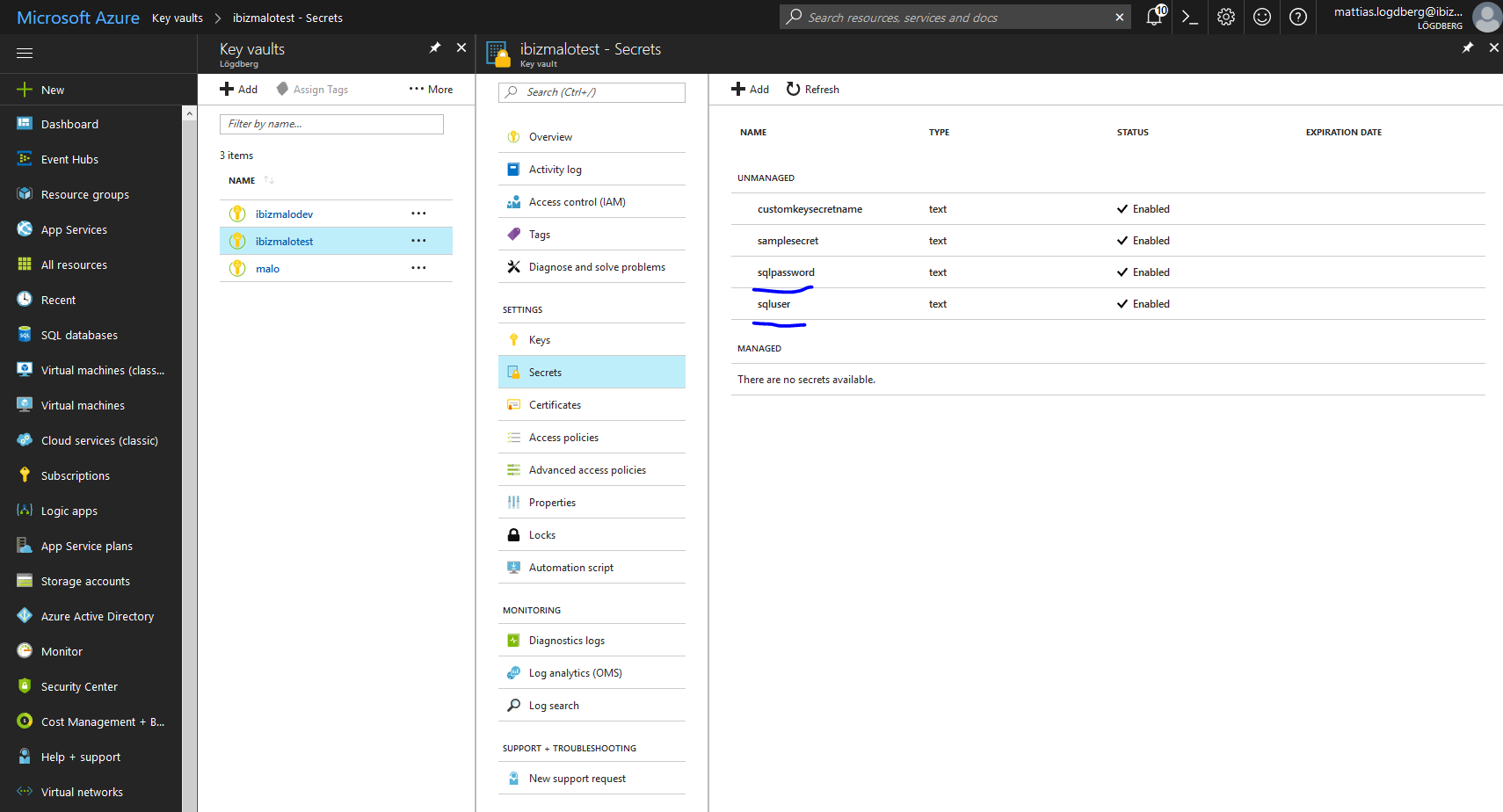 Using KeyVault with ARM deployment requires that the KeyVault has enabled access for Azure Resource Manager for template demployment and that the principal (AAD Application) that is used when deploying has permissions to access the secrets. 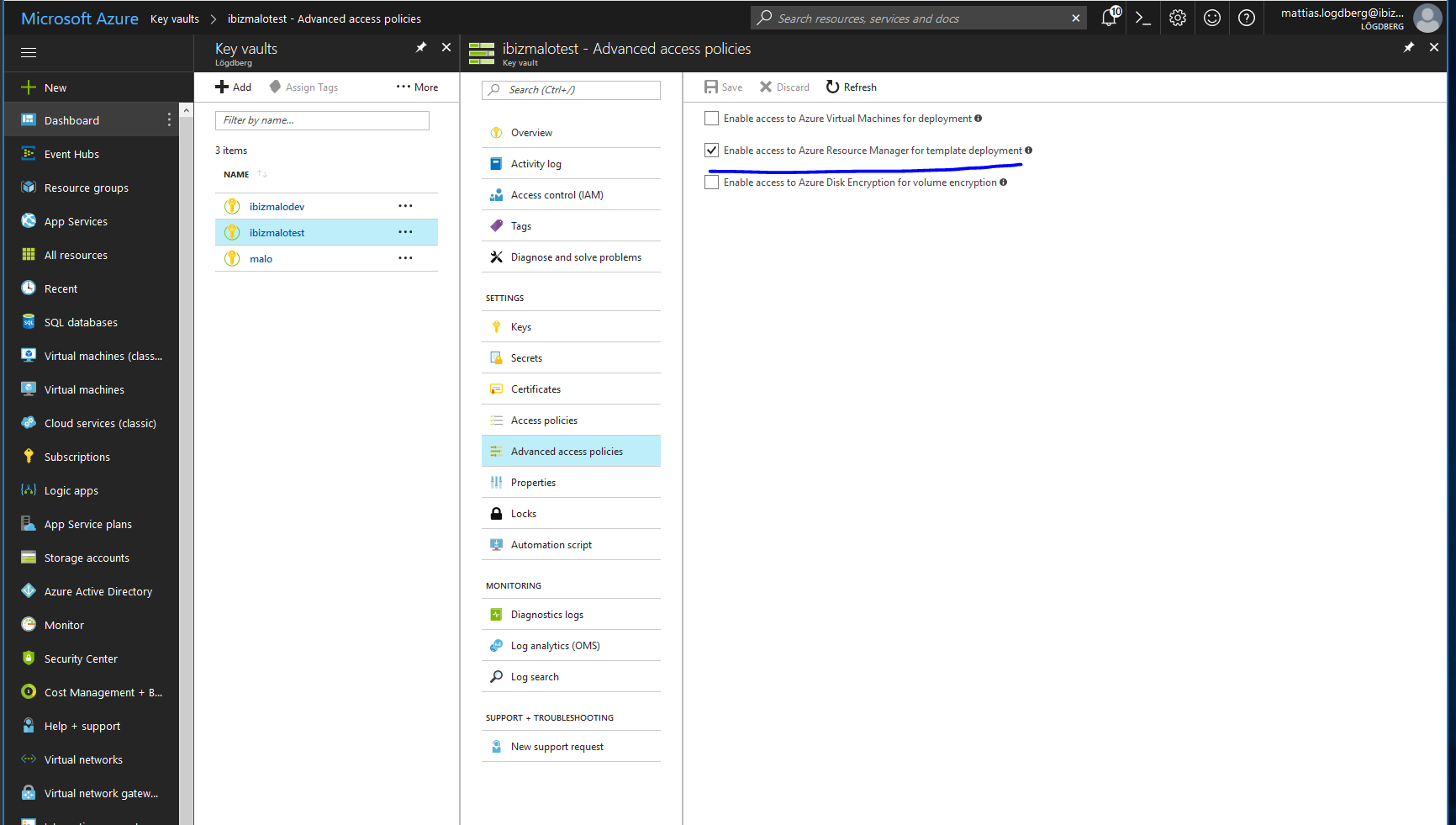 Now secrets are stored in Key Vault and the developer setting this up don’t know the actual values in test/prod just what the secret’s name is. The deployment flow looks as follows below where during deployment the secrets is collected from KeyVault (1) and used when creating/updating the API Connection (2) ) this also means that no secrets are stored in the ARM template parameters file and that is great! 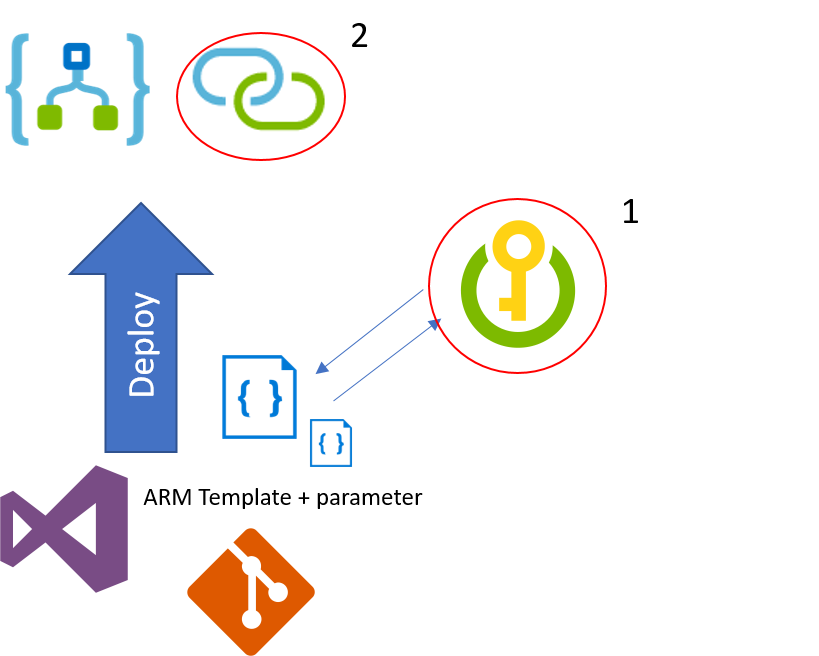 IMPORTANT if the value in Key Vault is changed a new deployment is required to update the API Connection.

Accessing Secrets from Functions/Web Apps or other c# applications

Any c# application can easily use the KeyVault SDK to retrieve secrets from Key Vault during runtime, but we do need some things in order to make this possible, from code we need an AAD Application in order to grant access to the secrets, I will not go through how to create one here but read more here

When it’s created we need to get the Application ID (clientId) and one Key (clientSecret).

Now that we have collected the information needed we also need to make sure that our AAD Application has access to the secrets, that is something we are adding to the Key Vault under the “Access Policies”:

Press the “Add new”, select the principal (AAD Application) in my case the KeyVaultApp, in the Secret Permissions we only want and need Get and no more privileges should be given to the Policy.

And a bit of code, sample bellow, for more indept about how to use in Functions read more at Jeff Holan’s blog post:

Code to retrieve a secret thesecrets

First the settings are added to the Function App Application Settings:

To handle the authentication we need a method to send i to the AuthenticationCallback object that takes 3 parameters, authority is the login authroity i.e: “https://login.windows.net/1cb87777-3df4-428b-811a-86a0f215cd35” the resoruce is what resource we are trying to access (KeyVault): “https://vault.azure.net” and scope is the scope we are accessing with normaly empty string.

Then the code part that is actually collecting the secret is the following, we need the URI to the secret that we compose of the Key Vault name and the secret name, and the GetToken function to send in to the AuthenticationCallback object.

After this setup is completed we now are collecting the secrets from Key Vault during runtime and therefore there are no more secrets stored in application settings or in code and we have reused the same secrets in diffrent areas. 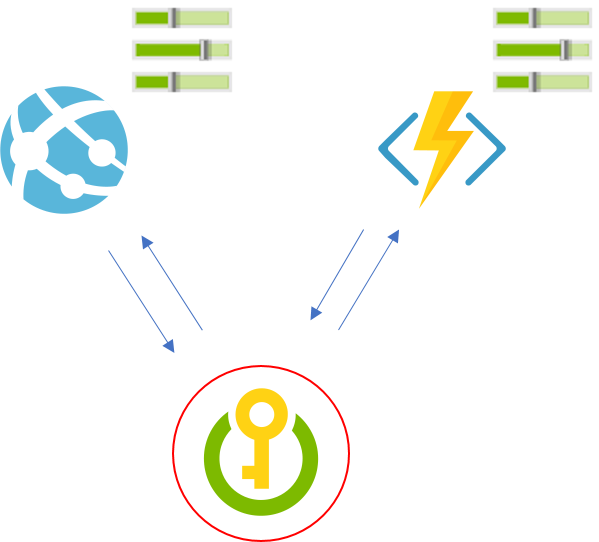 I really like to remove username and passwords from code and settings since it’s always a mess to manage and in handling them, also there are a few security aspects to consider as well. Making it possible to get username/password or other secrets from Key Vault inside your Function, Web App and at the same time use them when deploying ARM templates like with Logic Apps API Connections or API Management is really the true win, since we now only need to manage these in one place and can use them wherever needed.

In the end we are creating a solution as the image bellow and this gives us a centralized place for our secrets and we only spreading them if we really need to like to an API Connection and that is done integrated with ARM. 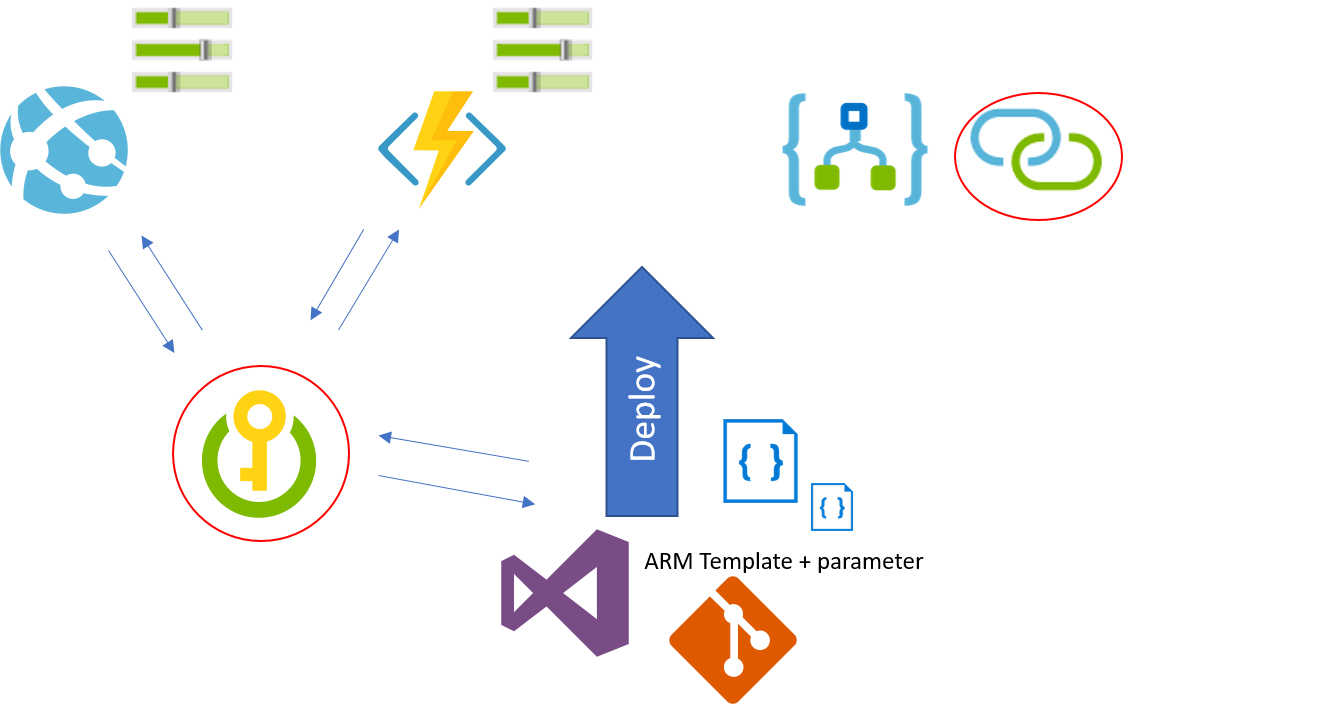 OBS! Make note that if we access Key vault via code an update is reflected emediatly while used via ARM a new deployment is needed in order for the new value to be deployed to i.e. password for a API Connection, making it vital to have good Build and Release processes).