In an ever growing hybrid world the need of exposing services that are hosted On Premise are growing and so are the limitations and requirments aswell, the newest way of exposing HTTP based services in Logic Apps is via the Logic App Custom Connector via the On Premise Data Gateway

So previusly when having the task of calling on-premise firewall protected services from our Logic App’s it wasent possible without firewall openings or other resources to help connecting.

But now it’s possible and let’s solve it with the newly updated On Premise Data Gateway and a Logic App Custom Connector.

First of make sure you have the latest version installed, follow the install instructions found here. .

Rememeber the name of the installed Gateway if you have many.

In this scenario I will expose a swagger api endpoint, the simple standard Values Api, that are created default in a new Web App project with type Api App after enabling Swagger we can browse the swagger definition, as follows:

Now we are prepared and can start of with creating the Logic App Custom Connector based on the swagger file, note that it’s also possible to use WSDL files as source.

In the Azure Portal create a Logic Apps Custom Connector: 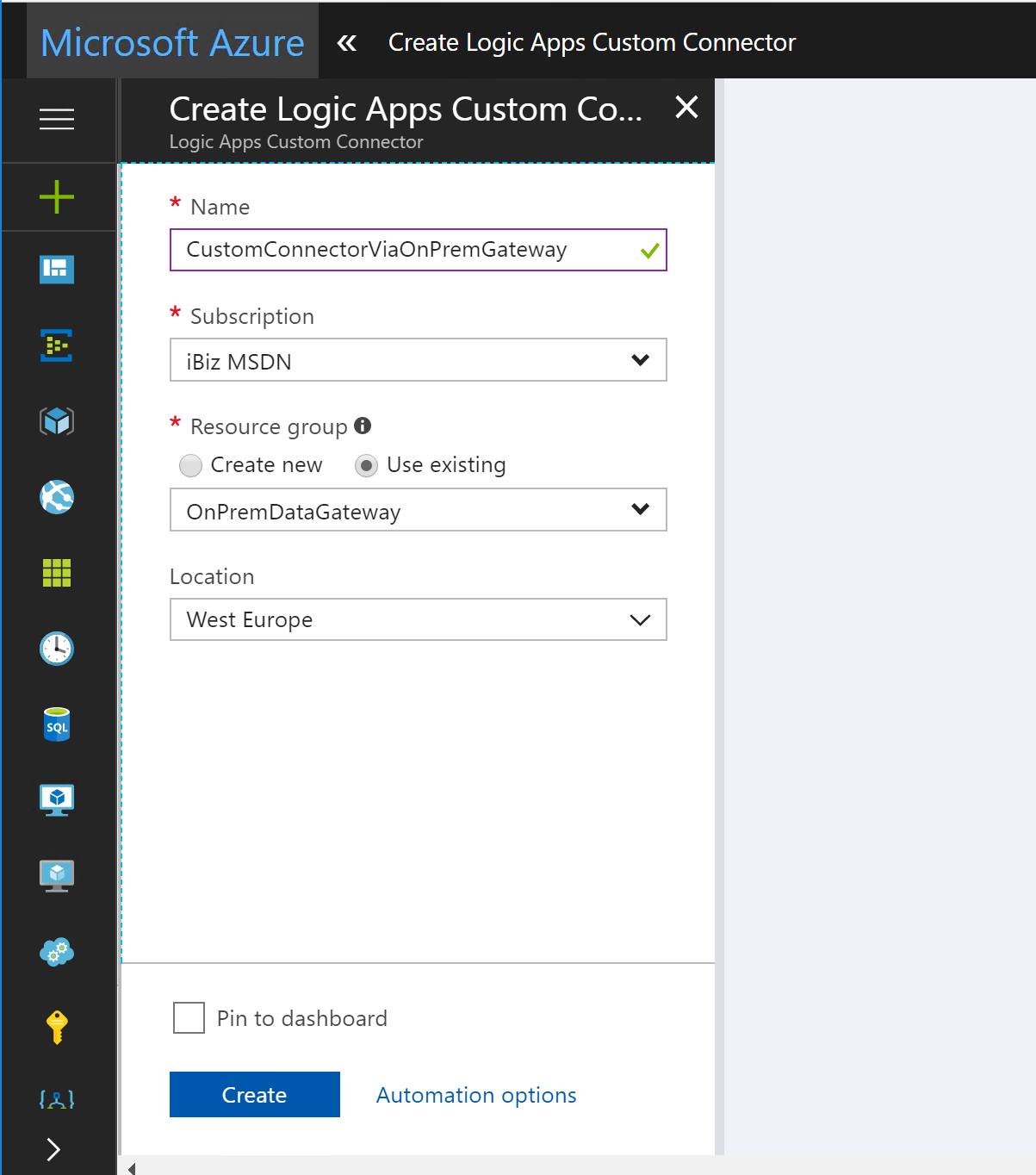 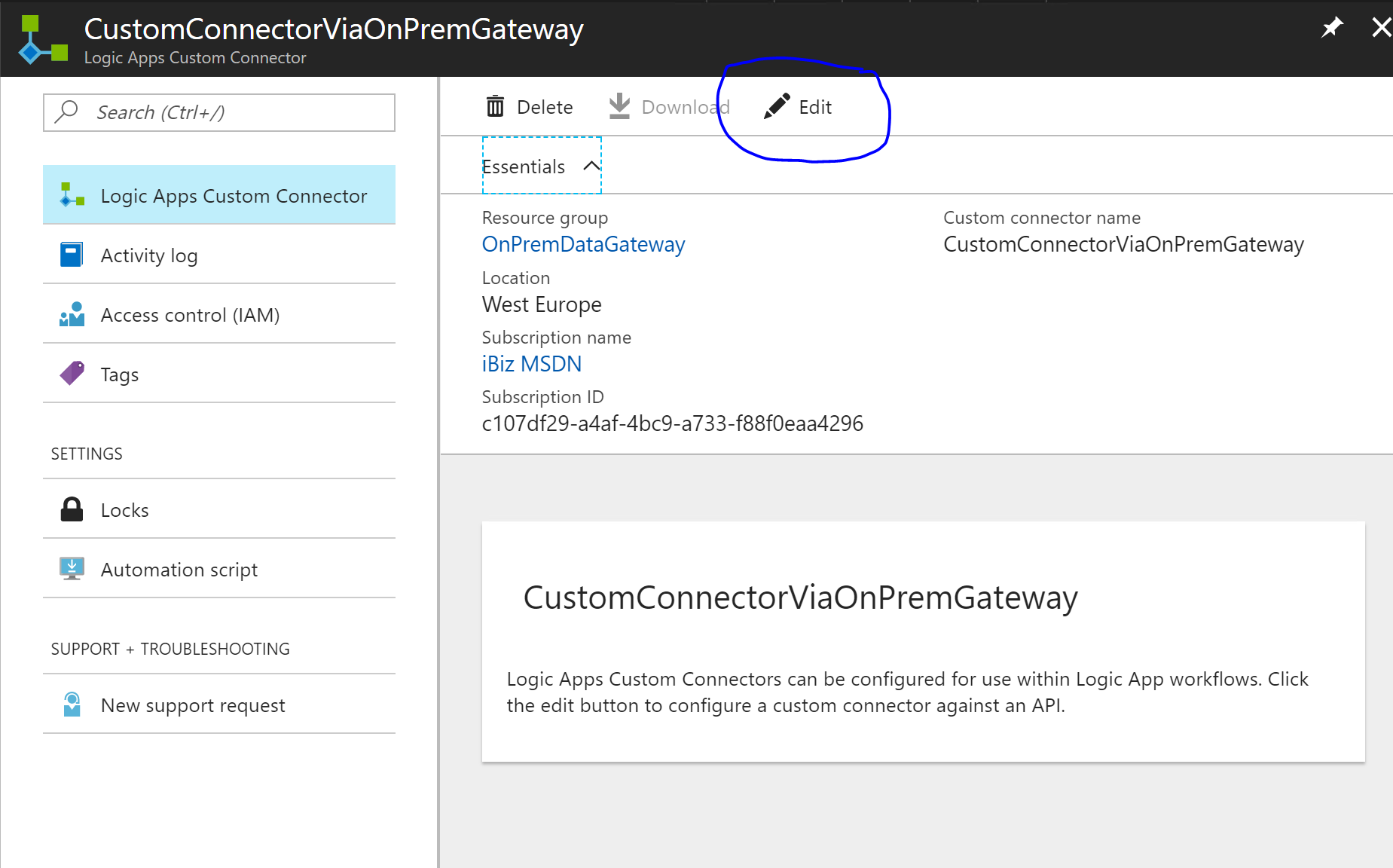 Now the API Connection is generated based on the swagger file, scroll down and make changes as you see them neeed but dont’ fotgett to check the “Connect via on-premises data gateway” checkbox and if needed change the URL’s to match the URL’s to the server exposing the service (I’ll just keep em same since it’s on the same machine for me) 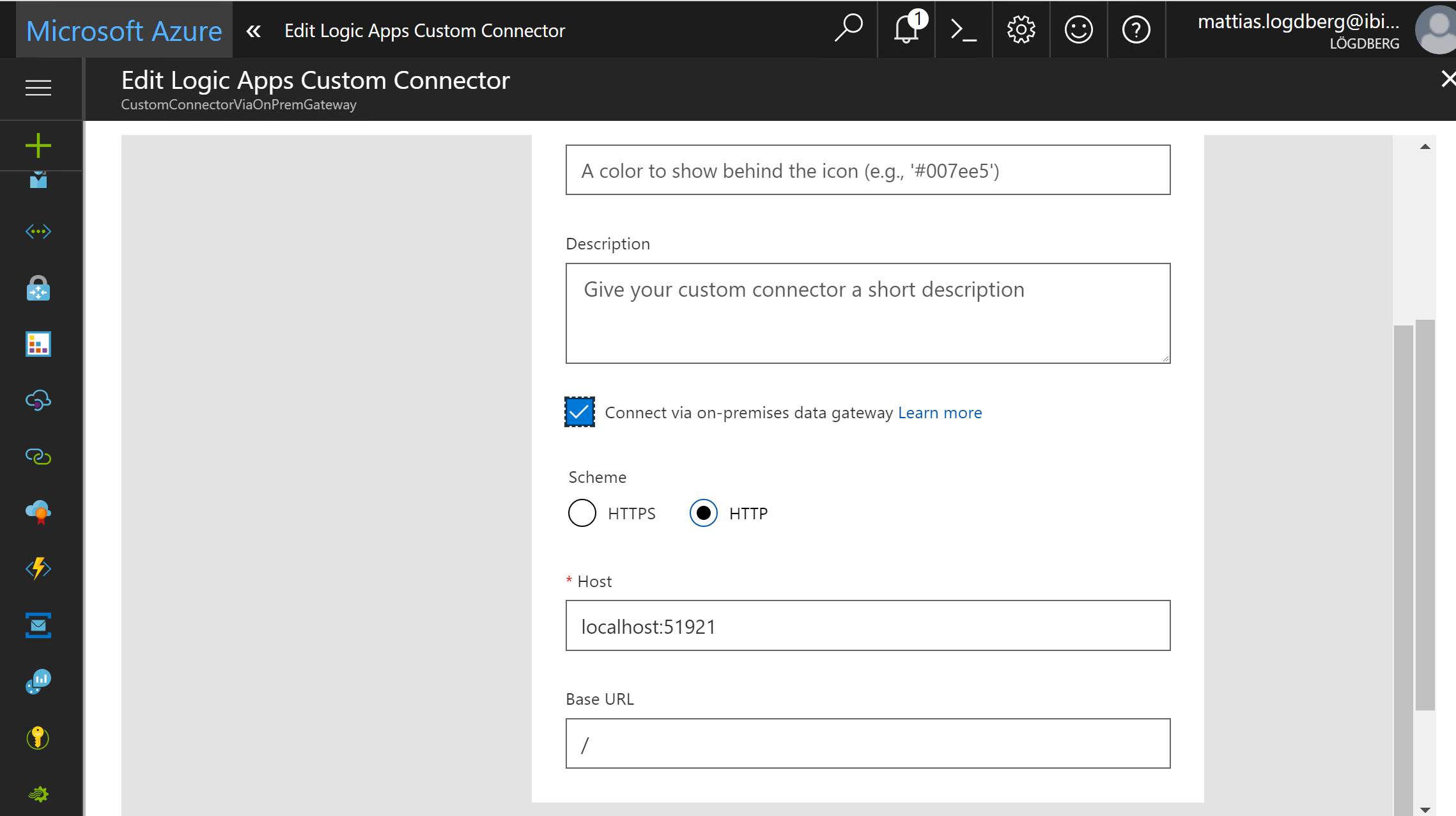 Now press Continue and move on with the process, once you are finished make sure to update the Logic Apps Custom Connector by pressing the check mark at the top:

Inside the Logic App we can now find our Custom Connector among all the others and if I start searching for it I can easily select the appropiate action I want to use: 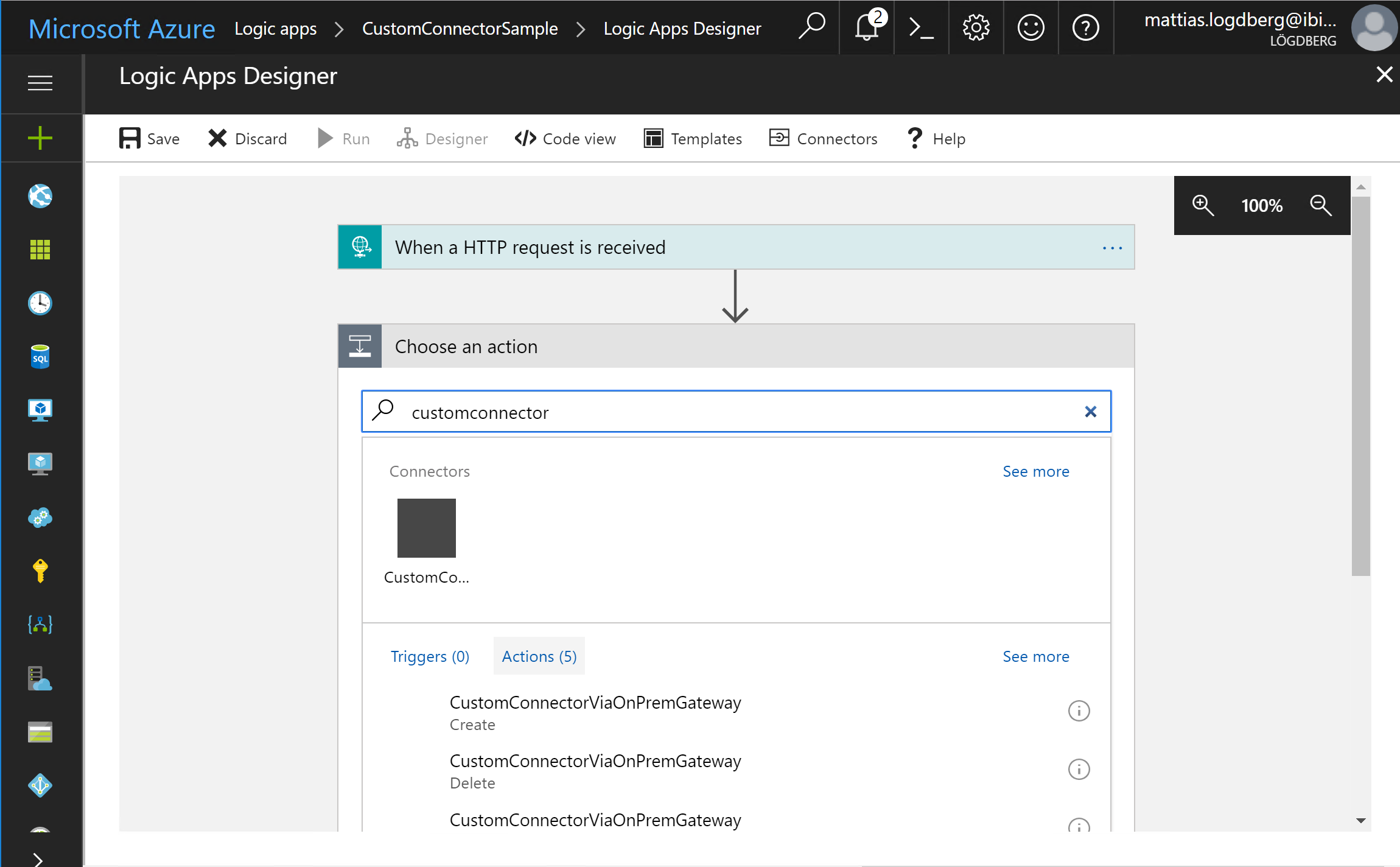 After I pick my operation, I just took the Get All I need to create the API Connection that will be connected to my Custom Connector, here is where I can pcik authentication method and also the Gateway I want to use. 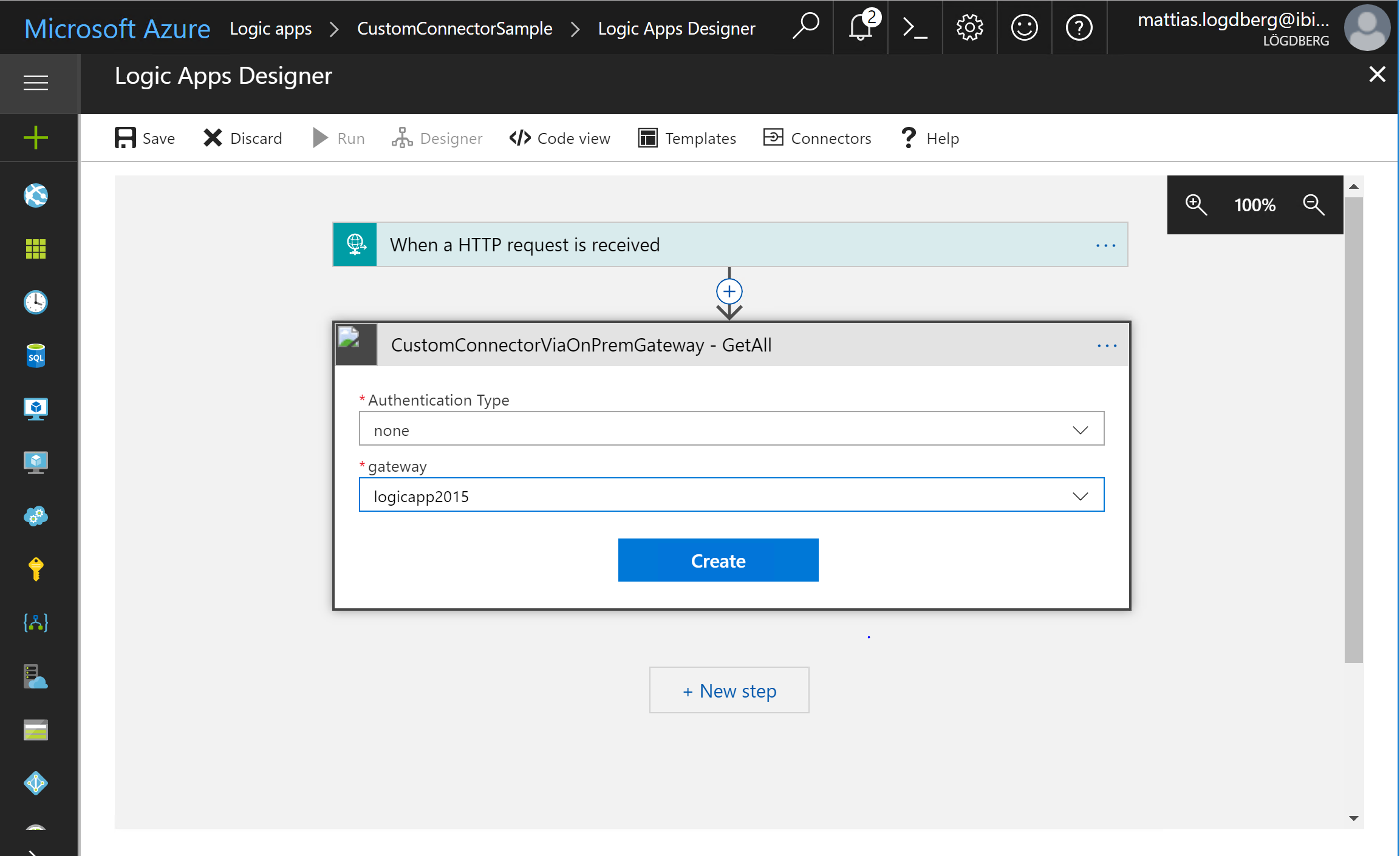 Pressing create will create the API Connection and the Logic App is completed for this sample, let’s save the Logic App and test run it, the result is that we will get the “values” returned as promised: 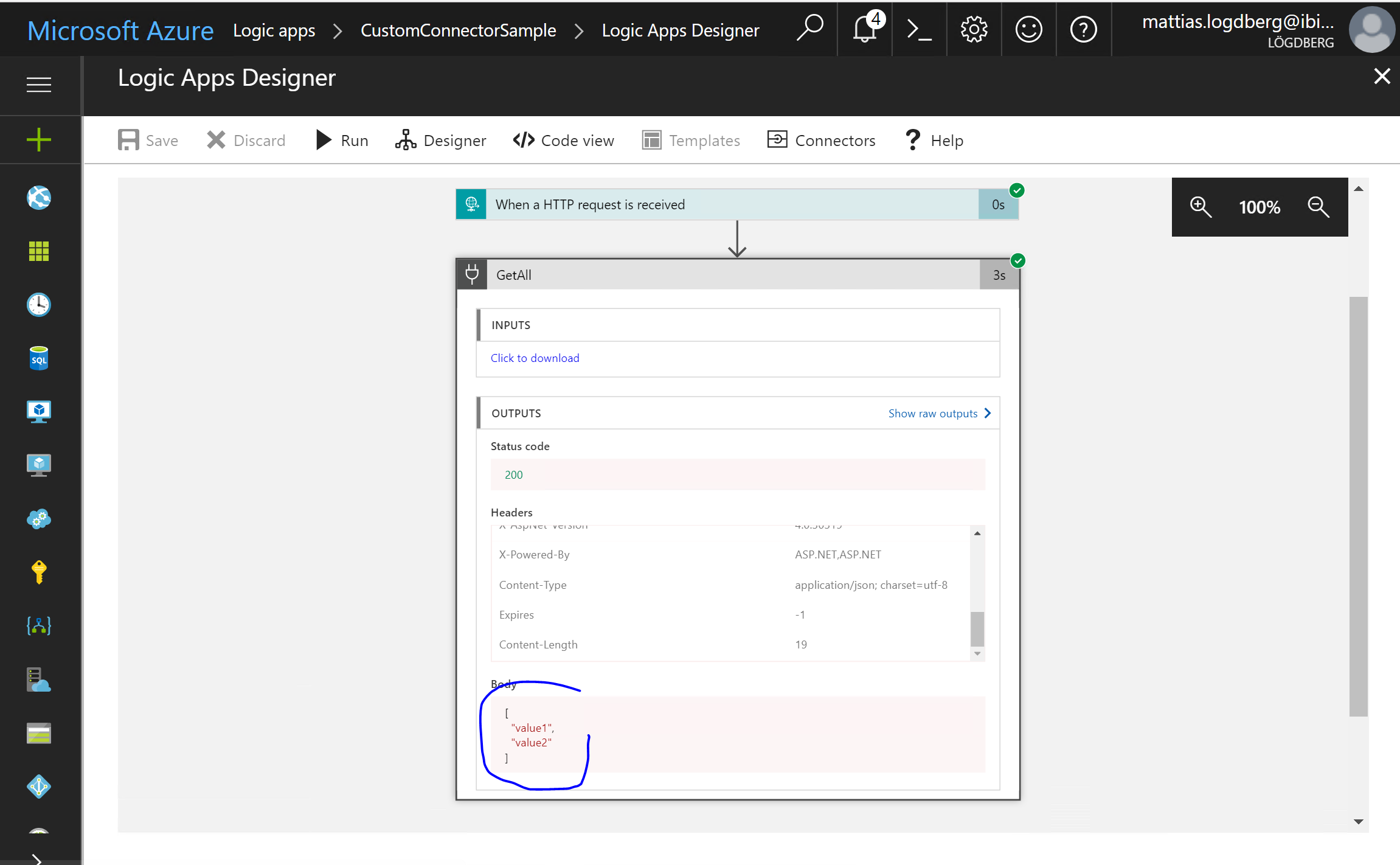 I think this is an amasing new feature that we really have wanted for a long time. This enables so mutch simpler exposure of services on-premises and in a secure and reliable way. No need for fireall openings, vpn’s, express routes or reverse proxies in a DMZ, we can just install the gateway and use it as our entry point.

Remember this is still in preview and I’ve encountered some issues when working with SOAP so there are some fixes needed, but it looks good so far!